So another year passes and with a myriad of interviews under our belts later, we broadcast live at the Cloud Expo Europe 2017. We had a great line up of guests including ITV, Google, LinkedIn, IBM, Fujitsu, as well as many others. However, this article is not about name-dropping who was on the show but more so for the general trend and theme. To note as a main topic of discussion was the IT concept “Blockchain”.

To the uninitiated of you, let me explain Blockchain as a concept in simple terms as there are many spin-offs, improvements and acronyms already appearing such as; Hyperledger, BaaS – Blockchain as a service, that can confuse you.

“A simple way to consider what Blockchain technology could provide is to think of a ledger (e.g. an Excel spreadsheet) that can only be updated when a majority of trusted participants, (known as ‘miners’ connected via ‘nodes’) have simultaneously agreed that the proposed transactions are valid and will not permit a situation whereby any erroneous “double-billing” could take place. Furthermore, the Blockchain-style ledger maintains a full and potentially transparent Audit-Trail of all of the transactions ever made via that particular ledger.”

With this said the use cases for a “Blockchain” are not limited to financial transactions, you can use this method across most industries where you would require asset control, verification, the state change of devices or even history validity (authenticity). One example of a non-financial sector use case is the company Everledger, showcased at many events and also one of the winners of The Barclays Accelerator Techstar programs in 2015. Everledger uses the Blockchain technology method to create a digital ledger, a database if you will, that stores information regarding Diamonds and can quite literately replace the paper based certificate of authenticity issued today. Not only this, it can store information such as location – history of where it was mined from to where it has been sold. Also, If the diamond has been stolen, and it has been part of the process within the Everledger system, it will flag up and show this with the digital authenticity key attached to it! This simply put is an insurance company’s dream come true and will save millions!

Anyway, this article is not specifically about Blockchain but the tech trends discussed at the Cloud Expo Europe 2017 event. In my opinion, there were four main themes throughout the Expo that were demonstrated/reinforced by guests on our live show www.Cloudexpo.tv

These were the four trends I saw that were very popular at the event, however, there were a lot more topics that were presented across the two days.

I can nearly see your eyes roll back as you read the next paragraph. What technology can underpin, be used for, or be best suited for one or all of the five above points? Mainframe Technologies!

Mainframe technologies may have had the resurgence of late for a few reasons.

As you can see there is a revival for the tech, there are amazing advancements in the supporting services around the tech, and it’s affordable not only to the large corporates that once had to have it. Now you can utilise the technology at a price you can afford because you need it and it just makes sense to.

Are we looking at a new dawn, era if you will, where mainframe technology will be method for cloud in its right, who knows but all I can say is that centralised technology that can cater for humongous workloads, provide a digital transformation you need with a cost you can afford has to be taken seriously as a major player in the tech industry!

Neil Cattermull
Director at Frontier Technology
Neil’s focus is on developing cloud technology and big data. You can often find him advising CxOs on cloud strategy.

Latest posts by Neil Cattermull (see all)
Share this article: 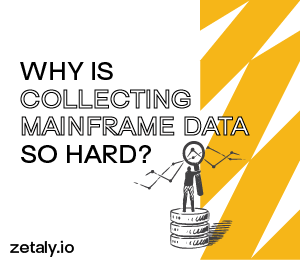