The first part of the article.

Let’s Boot the Mainframe Out!

The paper below talks of the value to business of their legacy systems and why the ‘rip out and replace’ is not a real option. The software investment on mainframes is often mission- or business critical and you leave the mainframe in haste at your peril.

‘For most established enterprises, core data and services that serve as the heart and lungs of the business are siloed within legacy systems. Legacy modernization refers to the process of adapting these older legacy systems to support modern business and technology needs.’

How APIs Can Modernize Legacy Systems

The next link is a pointer to a webinar but the advertisement for it tells part of the story I seek to tell very well. The webinar, delivered 10th November 2020, may be unavailable by the time you are reading this but the message lingers on.

‘Why do organizations that modernize instead of re-platform report paying less on hardware, software, and staffing, while reporting higher end user satisfaction?

Why does IDC project that organizations who modernize their mainframes will realize average benefits worth more than 6x what they invest to transform their mainframe platforms?

Even with these compelling data points, industry research continues to reveal a lack of awareness among IT leaders on how to leverage the out-of-box modern capabilities available on today’s “legacy” systems.

Too few know the modern power of the IBM z15; it is purpose-built for cloud, engineered to encrypt data everywhere, provide for cloud-native development, and deliver the highest level of stability and availability.

As a result, organizations are making decisions based on a lack of information, and unintentionally spending millions of dollars and taking years to re-platform their mainframe, only to risk rendering their most critical business systems less secure, less reliable and less robust.’

The eBook below shows how to let the mainframe take part in what is perceived as a young IT world unsuitable for such an arthritic ’old timer’. How wrong this view seems when one realizes how much of the world’s processing and data involves mainframes.

3 Ways to Connect Your Mainframe to Digital

Modernization is NOT Replacement

‘The CIOs understand what the industry too often fails to recognize: modernization is as much an exercise in integrating disparate application architectures as it is embracing microservices as an architectural pattern. The ability to extend existing – and in many cases, substantially large – data sets managed by legacy applications is paramount to enabling the digital experiences consumers today expect. The use of APIs and gateways as well as extending messaging queues to cloud-native and modern applications is a standard means of modernizing business functions.’

Because that’s ultimately what we’re doing. We aren’t modernizing apps; we’re modernizing interaction with apps to enable a new means of engaging with the business.’

‘We aren’t modernizing apps; we’re modernizing interaction with apps to enable a new means of engaging with the business.’

A persistent misconception about the mainframe is that it is too old to mix in with the dynamic young world of today’s IT; the paper below shows that this is indeed a MISCONCEPTION. Shall we dance?

3 Ways to Connect Your Mainframe to Digital

The link below cites several webinar videos expanding on the theme of mainframe integration.

3 Ways to Connect your Mainframe to Digital

A Benefit of Maturity

The maturity of the mainframe environment, often quoted as a hindrance, means that ways to monitor, and hence manage it, are also mature. An example of mainframe monitoring is given in the link below.

[Note: The inclusion of this link does not constitute a recommendation for or endorsement of any products mentioned in it.]

‘The COBOL programmers’ Facebook page counts over 14,400 members, and it continues to grow. Dice, the employment site, has 4,000 COBOL specialists and another 8,000 who have some experience with the language, according to Paul Farnsworth, chief technology officer of DHI Group, Dice’s parent company. Many of today’s COBOL programmers are cross-trained in Java; cloud systems, including Microsoft Azure and Amazon Web Services; and XML. ……

.. modern COBOL is even easier to learn, which is another reason why Conway says COBOL code isn’t going anywhere. It supports many of the language features from C# and Java, and can run directly on .NET and Java platforms (compiling to respective byte code representations). “This allows in-process mixing of languages, and the ability to naturally exploit the power of these ecosystems. It’s also fully backward-compatible with old COBOL.’

Why enterprises are adapting their COBOL apps vs. ditching them [a telling document] Read More

A report from Reuters in 2017 yielded the following jaw-dropping statistics:

The Microfocus report below skewers the idea that if you have a mainframe running COBOL applications, you are dead or dying in the new world of the internet, when applications and all that new ‘shiny’ stuff. It shows in the results form a survey that:

This means running with the strategic and often business critical applications and not scrapping or rewriting in Python or Java.

Anyone that understands the large companies who live by many COBOL applications vital to their business will know that risking a conversion/migration/rewrite for them is asking for trouble. See the trouble that TSB (UK Bank) got themselves into when migrating critical applications in the same form from one system to another.

Anyone who doesn’t understand large companies, will trot out the myths I have outlined above, that is, until somebody says to them; ‘OK, draw up a plan for migrating our COBOL systems to the ‘modern’ stuff and ‘carry the can for any losses we incur if it doesn’t work.’ Estimates on this task predict many millions of dollars and very high risk (see the ‘ditching’ article above).

… and despite the fraught Coronavirus situation, COBOL surfaces;

The standard bearer for the mainframe today (2H 2020) is the IBM Z, which is supports multiple operating systems (running simultaneously on the same hardware) including z/OS (grandson of MVS), z/VM, z/VSE, z/TPF and Linux together with a raft of IBM and Independent Software Vendors (ISV) software to round out the IBM Z as offering business solutions and not simply a collection of products. It is definitely not an old mainframe with a new coat of paint; it has radical new features whilst retaining its compatibility with older models of mainframes.

The programme for IBM Z education laid out below seems totally unnecessary for a ’dead’ system, doesn’t it? Read on and learn.

The larger (enterprise class) model of the IBM Z (z15) is about the size of a two stand-up refrigerators (side by side), compared with the large real estate (tennis court) of the older mainframes and their control equipment. They are also orders of magnitude greater in numerical aspects such as memory, power, storage, throughput and other performance and processing attributes compared to their predecessors. In particular the RAS (reliability, availability, serviceability) introduced in early mainframes remains, but in advanced form in modern mainframes.

Mainframers are a proud race with good reason to be so.

The pervasive encryption feature is an interesting aid to security. It has been found that less than 3% of all data breaches or other cyber damage occur on encrypted systems.

In summary, the z15 mainframe and its siblings, z13 and z14, are the incredible hulks of the computing world whilst having the strength of Popeye, the speed of Usain Bolt, plus the good looks of the late Muhammad Ali, making them ‘The Greatest’ for heavy-lifting work.

‘Mainframes are also resilient when it comes to disaster recovery. Santalucia told the story of an insurance company located in lower Manhattan, within sight of the East River. The company operated a large data center in a basement that among other things housed a mainframe backed up to another mainframe located in Upstate New York. When Hurricane Sandy hit in 2012, the data center flooded, electrocuting two employees and destroying all of the servers, including the mainframe. But the mainframe’s workload was restored within 24 hours from the remote backup.

The x86 machines were all destroyed, and the data was never recovered. But why weren’t they also backed up?

“The reason they didn’t do this disaster recovery the same way they did with the mainframe was because it was too expensive to have a mirror of all those distributed servers someplace else,” he explained. “With the mainframe, you can have another mainframe as an insurance policy that’s lower in price, called Capacity BackUp, and it just sits there idling until something like this happens.”

Mainframes are also evidently tough as nails. Santalucia told another story in which a data center in Japan was struck by an earthquake strong enough to destroy all of its x86 machines. The center’s one mainframe fell on its side but continued to work.’

Why Mainframes Aren’t Going Away Any Time Soon

The mainframe comes into its own financially when you consolidate some 20-30 x86 servers, as the reference link above tells us, along with others.

Driving Digital Success with the Mainframe

The report concludes as below.

‘Conclusion
The mainframe is front-and-center in today’s digital business environment, viewed as a valuable, growing, and evolving platform by IT professionals and executives. The results of the 2020 BMC Mainframe Survey underscore three key themes that define the current mainframe agenda: adapt, automate, and secure.’

Latest posts by Terry Critchley (see all)
Share this article: 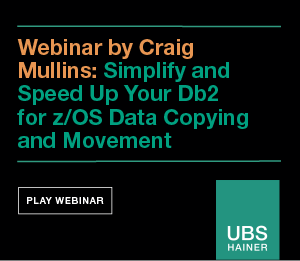